Give Monthly
Give Now
Switch to the mobile version of this page.
Get a Newspaper | Shop Local | Get Tickets | |
Vermont's Independent Voice
Seven Days

Deputy publisher Cathy Resmer is an organizer of the Vermont Tech Jam. She also oversees Seven Days' parenting publication, Kids VT, and created the Good Citizen Challenge, a youth civics initiative. Resmer began her career at Seven Days as a freelance writer in 2001. Hired as a staff writer in 2005, she became the publication's first online editor in 2007. In 2010, she became a minority owner of Seven Days' parent company, Da Capo Publishing. She lives in Winooski with her wife and their two children.
@cresmer
cathy@sevendaysvt.com
goodcitizenvt.com

Saturday Night Fervor On a date with Clean Slate, Panton's rock-and-holy-rollers May 04, 2005 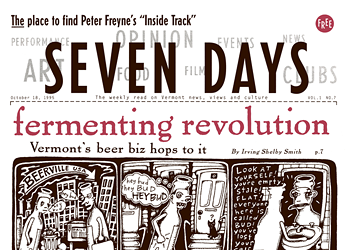 Timeline: Seven Days Looks Back at 20 Years of Publishing in Vermont September 09, 2015